With Easter early this year, the season started even earlier – the DO keen to ensure his high standard of safety were achieved for the rest of the season had us all down in Portland on the 11th March ready to practice rescuing one another!

The conditions above the water were near perfect as we headed out of the harbour on Saturday morning, with the nerves of the Dive Leader trainees hardly showing as we pulled the throttle back on the RIB and Alex reached for his freshly minted plastic cards of tricky scenarios that were about to unfold.

Just to ensure that the element of surprise was not all one way, the number of such candidates had sprung up from 3 to 4 so Alex had to deploy his creativity to think of a new type of diving incident for late entrant Sofia…

… and so we had people showing their fulling acting skills as a plethora of disasters from “engine failures” to “lost buddies” unfolded. The oxygen tank was deployed to good effect (and mostly people remembered not to actually switch it on!). Overall the morning was a formidable success – even if the max bottom time was 6 minutes!

So with the hard work done, we set off on the more serious matter of collecting some dinner for the evening; the site of our provisioning: Lulworth Banks (and a little top up from ASDA). Now the visibility was not that great (above the water or below the water, with some fog banks moving through to keep the boat driver on their toes) which did make finding scallops quite tricky (although we saw quite a lot of Plaice – they were not on the menu so they were left to relax), but between the crew we pulled up about 25 – enough for a decent meal, ably prepared by Nathan and Sofia.

So as Sunday dawned we went in search of clear waters, and clear airs – at least we scored 50%! The weather was fabulous! A ‘drift’ starting near the James Fennel on the west of Portland showed that the murk was not much better there so we headed for a bacon butty with fingers crossed for luck on the main wreck of the weekend the Elena R. This proved the best dive of the weekend as (on the 3rd attempt) we shotted the wreck, and those hardy enough to make it 4 of 4 dives got to explore this enormous ship that went down in 1939. Some of them even managed a celebratory drink before the drive home… 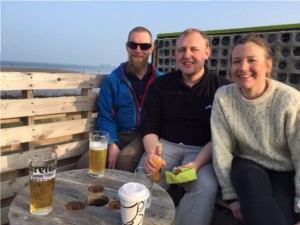